undeterminants deals with different forms of developments and processes of decision-making, and emphasises their (non)lineary courses, as well as thematising extraneous influence and unpredictability of coincidence and error.

The work of Jonas Etter describes the mutual bond and the relationship between the artist and the materials he uses. In precise experimental arrangements and in his examination of the material-specific properties of ink, aluminium foil, paper, sugar or fire, the moment of the well-intended, but always uncertain ‚return‘ of the artistic material is central. The exploration of material-specific reactions of the material creates an experimental situation: ‘What do you give me if I heat you, if I pour you out, if I fold you?‘ The site-specific work in the Strahlensaal takes up the dialogic form of a dialogue between the material.

Johanna Jaegers projection unstill depicts the course of ink sinking into a water container. Twenty-five drops of ink, released successively into the water, diffuse in water. The experiment is captured within a panorama-like frame for 20 minutes. In the beginning, the ink spreads rapidly, so that the initial starting points start to blur and an abstract image extracts from this process. The emerging images remind us of the impressionist paintings by William Turner. The slowly changing flow of the ink is hardly visible, but still perceptible. The increasing slowness of change within the video contrasts with the stormy composition of the momentary frame and unleashes a meditative pull towards the beholder. Movement and blending of molecules will eventually come to a stillstand, this moment, however, lies outside the frame of the video. The pattern of blending water and ink consists of a combination of predictable factors, such as the density of elements and movement direction, but particularly of coincidence.

Johanna Jaeger studied in Montpellier, Berlin and New York. She lives and works in Berlin.

Through the transformation process of burning charcoal, the objects have lost their original colour, but the details of their surface are preserved and preserved forever. The physical handling and immersion in the spatial depth of the work make it possible to perceive the complexity, the lightness and the identity of the spatial drawings. Ulrike Mohr increasingly dissolves the boundaries between material, space, time and sound and thus creates different spaces of interpretation and experience. In the Strahlensaal, the artist shows the site-specific work Circular paths, which makes the blank space of a missing lamp the starting point for a circular spatial drawing that rhythmically creates a sound.

A white tablecloth, scalawags and a fresh breeze – utensils for a calm Sunday afternoon at the outskirts? Anton Steenbock’s installation Am 31. weht frischer Wind bei Mutti adapts this association in a humorous way: A white cloth is installed above a powerful fan, held by 25 little bottles, which sound like a wind chime, whenever the fan brings the cloth to dance in the air. This audiovisual dance resembles rather a trial of strengths: again and again, the power of the fan, increasing the movement of the eerie cloth, and its 25 holding elements on the ground balance each other out. Power of ‘moving along‘ and ‘staying here‘ coincide and form almost an equilibrium. The installation shows with the means of every-day properties, how the interaction of two forces can hold progress in a stable state. This possible shaping can occur when inner and outer factors, opinions and influences concur: a dynamic tug-of-war.

The Doom explores the potential of virtual reality for expanding the definition of sculpture. Floating in the air, surrounded on all sides by the work, the viewer experiences a black cloud rushing towards them*, giving an apocalyptic 360-degree view. The construction and deconstruction of this form balances between strong abstraction and realistic views, all of which use a reduced visual code of hard blacks and whites. Together with the strongly pulsating sub-bass-driven soundtrack, the VR work by Keplinger and Greiner creates a constant stream of constant change to which the audience is exposed. By choosing the environment unfamiliar to the earthbound, the airspace, the doom addresses the fascination of flying and examines the threatening and equally sublime moments of annihilation.

The Installation |¦¦| is a hybrid between the virtual and physical space, blending its boundaries by applying state of the art CGI-techniques and connecting these to actual physical alterations. Two exactly equal, vertically hanging glass plates are slowly lifted up and moved apart from each other. The following countermovement results in their collision and erasure. Both Glass Bodies react to one another and evoke each others reshaping with different levels of momenta and absorption. Although the whole process and setup seem to be completely reality and material based, only one plate is physical. The other one and its impact are reconstructed and simulated in a complex virtual setting. The set up tries to sketch a vision of the utopian moment when our physical reality will merge into the ambient digital space of a futuristic virtual (meta-)consciousness. A stable, balanced system of seemingly equal counterparts experiences its own collapse and is slowly drifting into chaos to the absolute point of standstill – by gaining and losing control over natural forces, the use of modern technologies, and its cross-reactions.

Observational satellites are high-tech apparatus used for the documentation, surveying and exploration of the Earth’s surface for scientific and military purposes. Hidden from the human eye, they are only noticeable as luminous points in the sky. As part of his sculptural and photographic projects on the genre of landscape representation, Philip Topolovac‘s series ‘Satellite Observation‘ (2009–2014) deals with the forms of these instruments of earthly self-reflection. He makes the invisible observers visible by reinterpreting their bodies based on optimal functionality into sculptural forms. Built by ESA Envisat environmental satellite was 25 meters in length, the largest ever built Earth observation satellite. After ten years of service the radio contact broke in 2012. Since then he has been orbiting as space junk in orbit and will eventually burn up in the earth‘s atmosphere. Cast in bronze, the lost satellite is given a lasting aesthetic presence.

Philip Topolovac studied in Berlin. He lives and works in Berlin.

Markus Wirthmann’s crystalline images eternalize a solidification process. Canvases are laid into different mineral salt solutions. Through evaporating of water content within the mineral salt solution, salt crystals form along the canvas. Outer influences as well as inner decision making play a major role in how the art work will be shaped and look like. The artist decides when to stop the unrestricted growth of salt crystals. Furthermore, outside influences such as the proportion of different salt  components, the temperature and humidity affect the outcome as well. Throughout this work cycle, different and almost unpredictable images emerge with different crystalline shapes and colours.

Markus Wirthmann studied in Braunschweig and Berlin. He lives and works in Berlin. 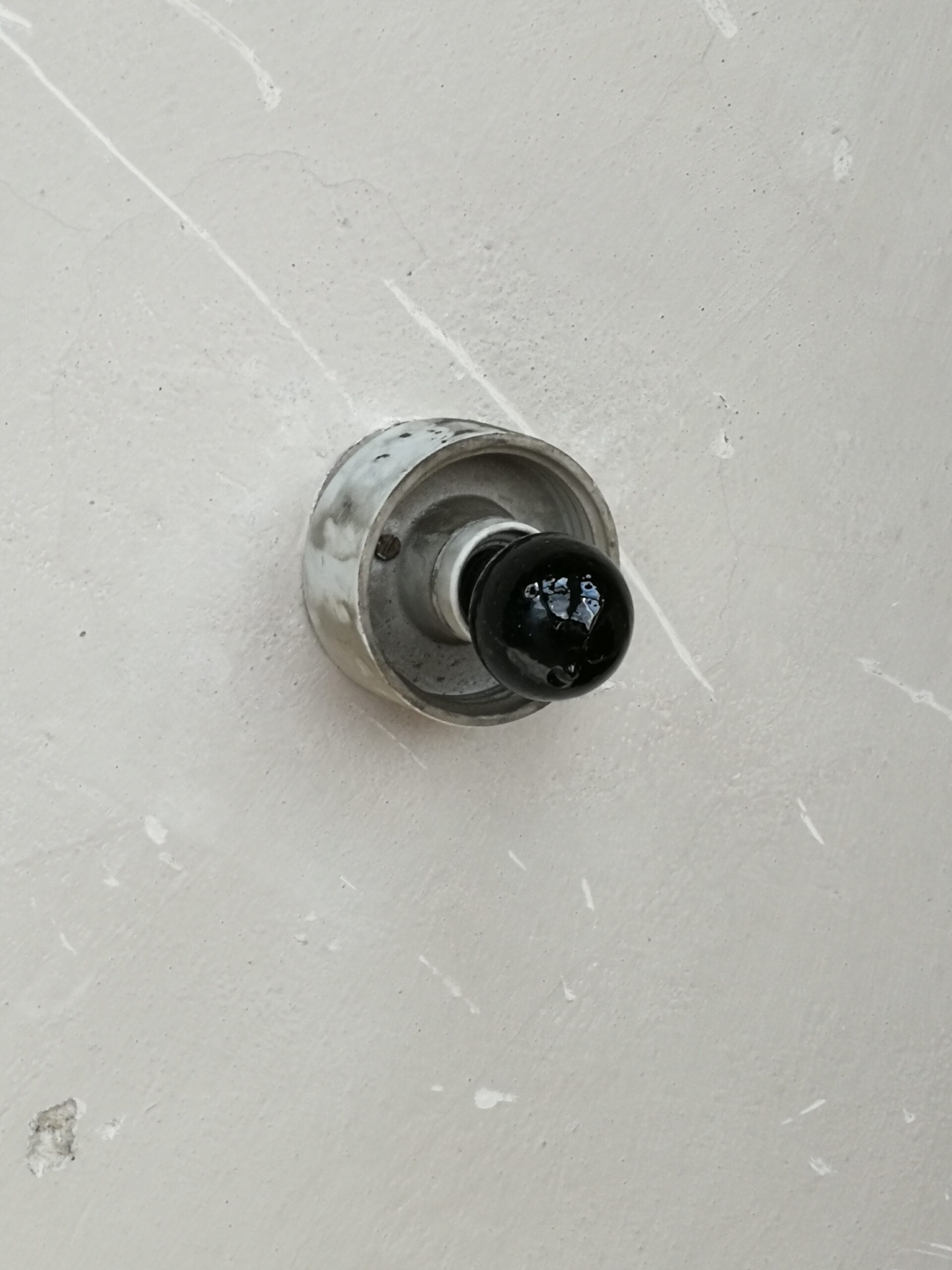 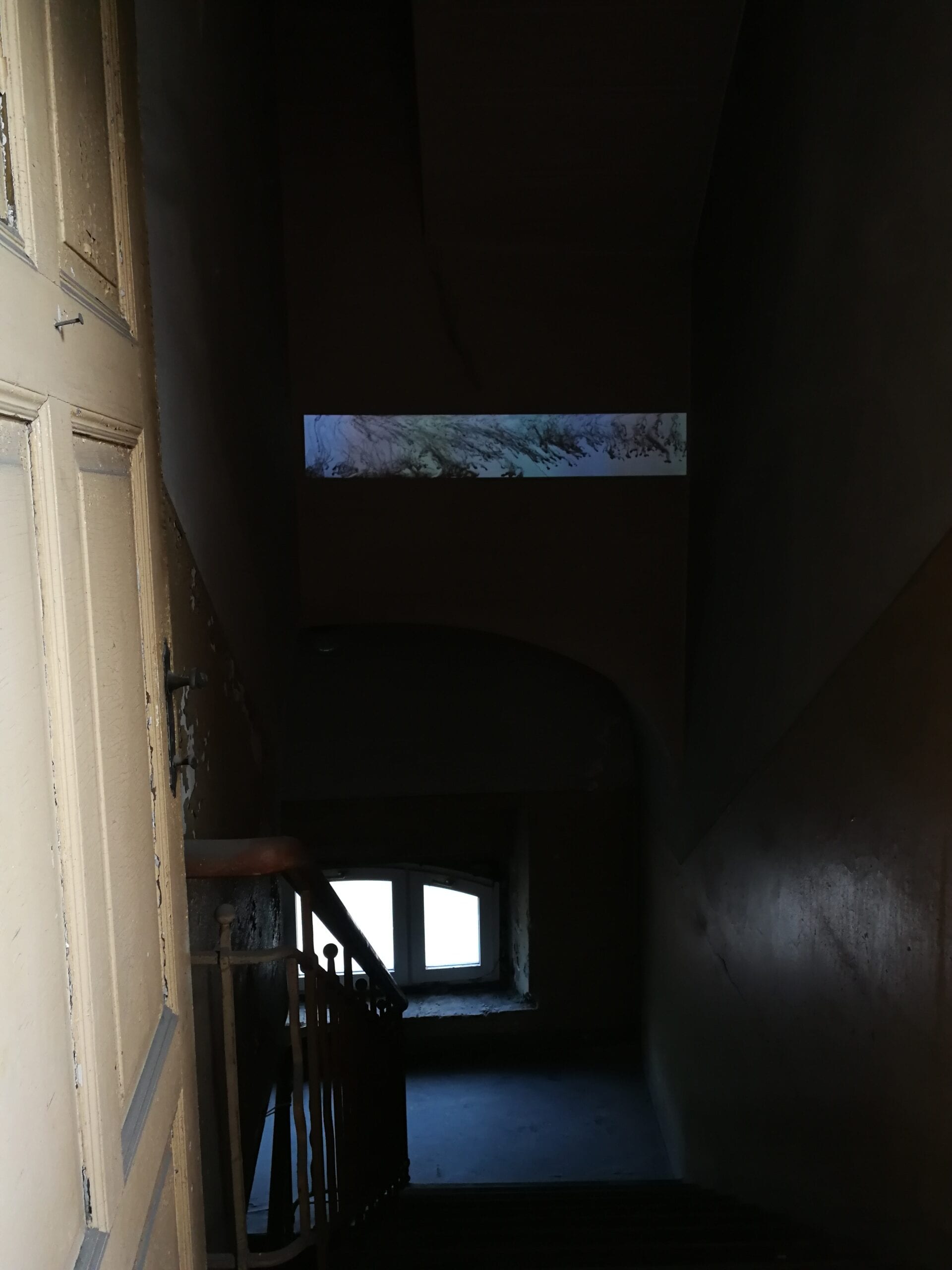 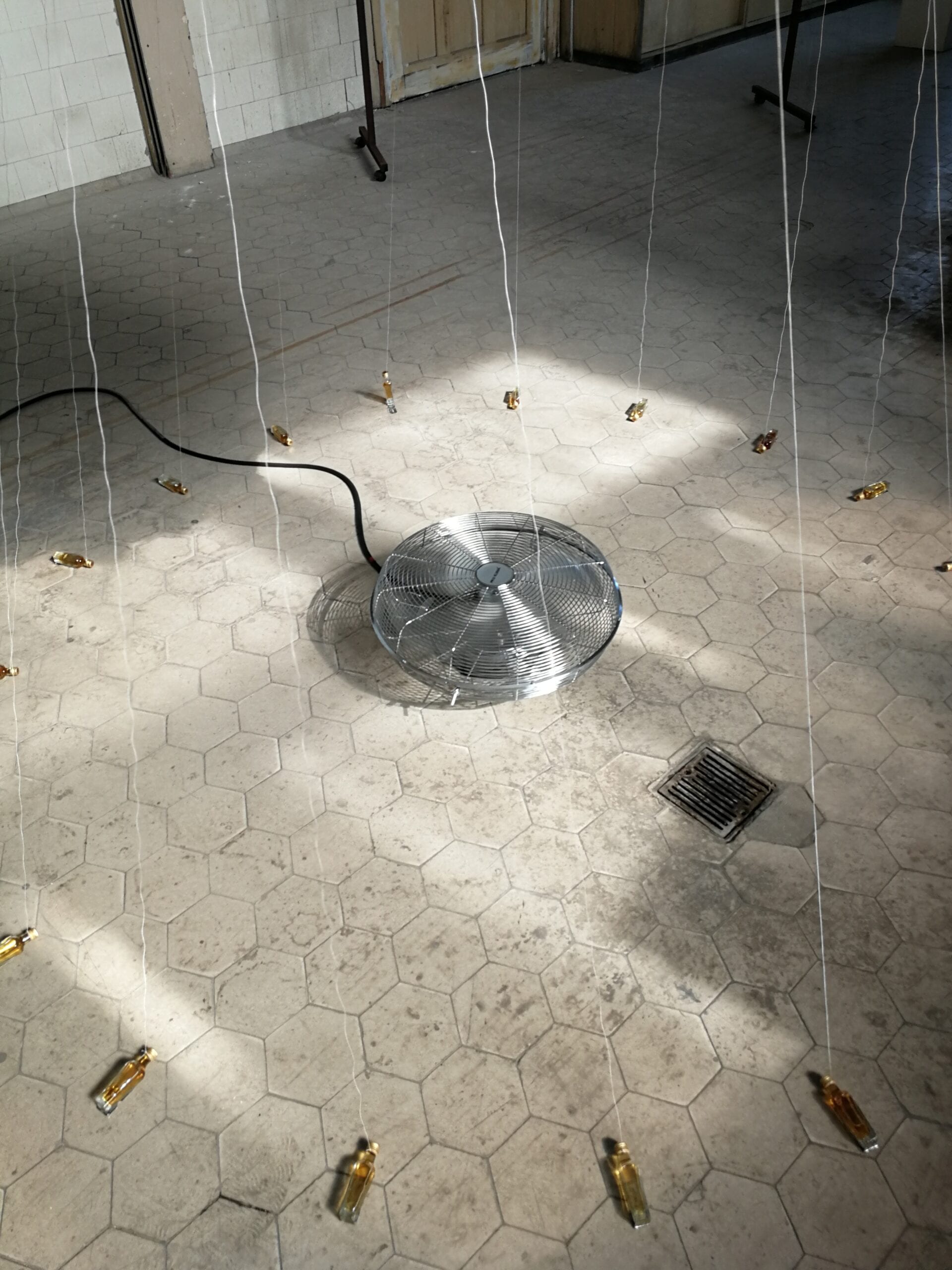 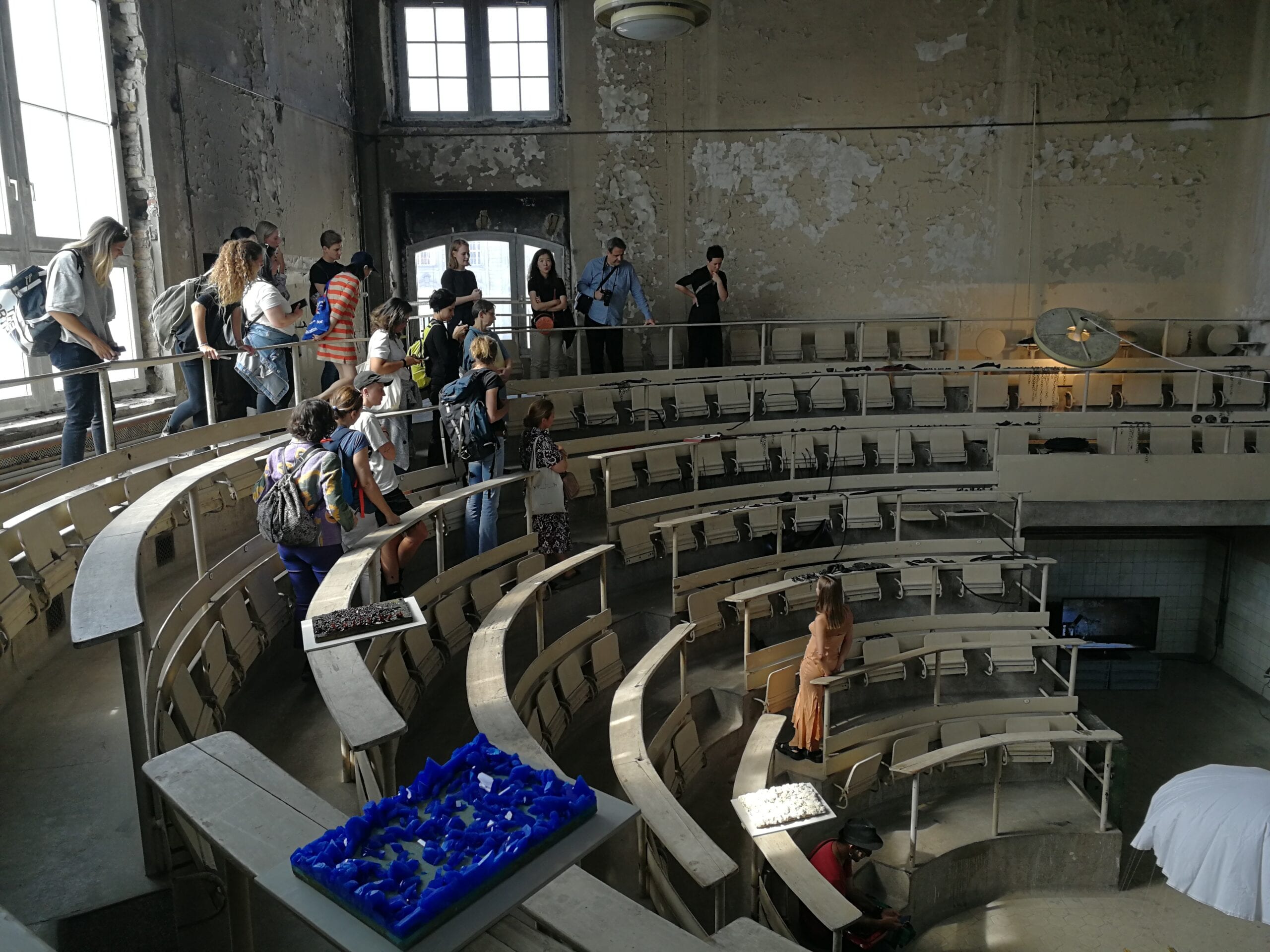 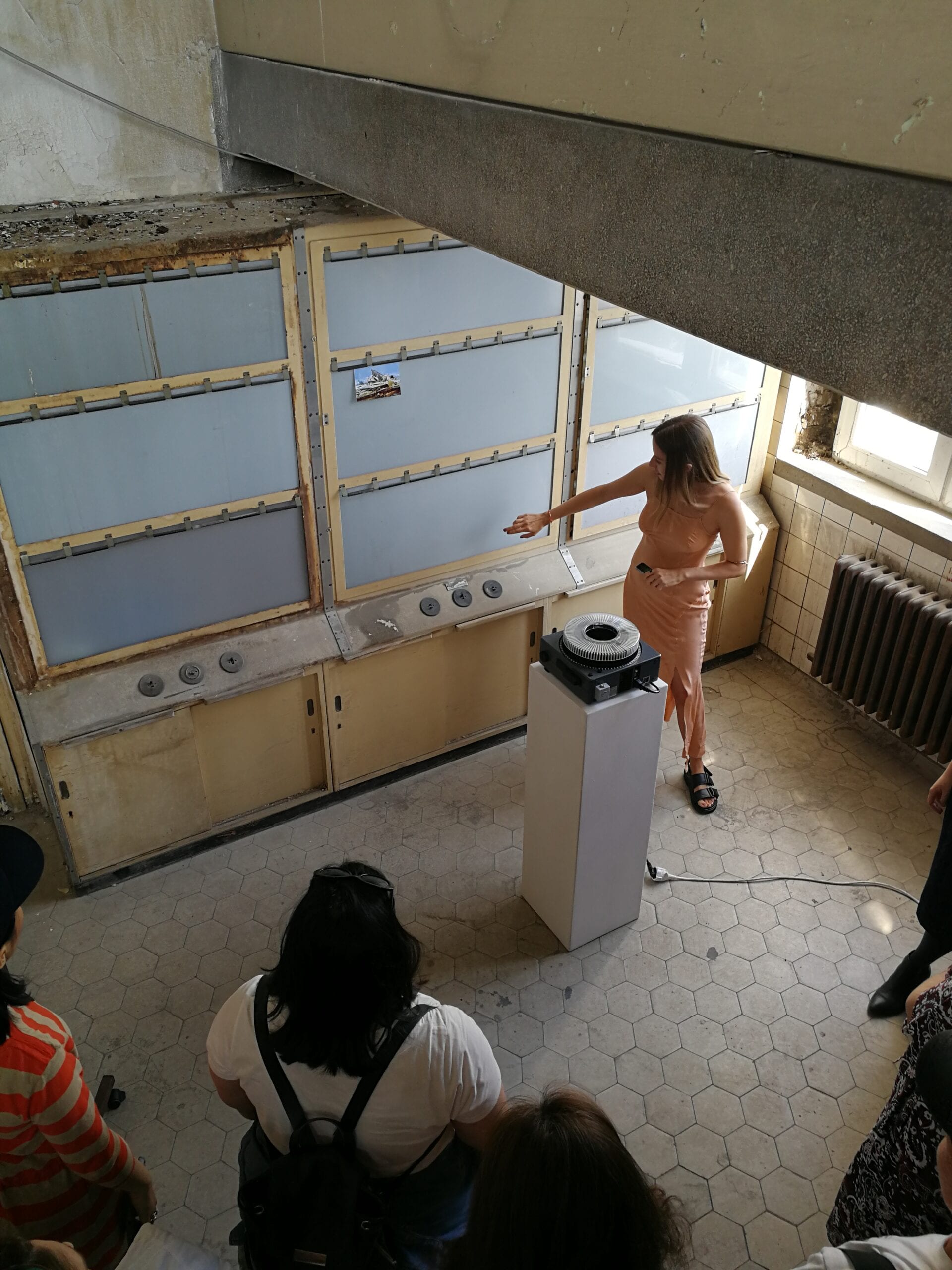 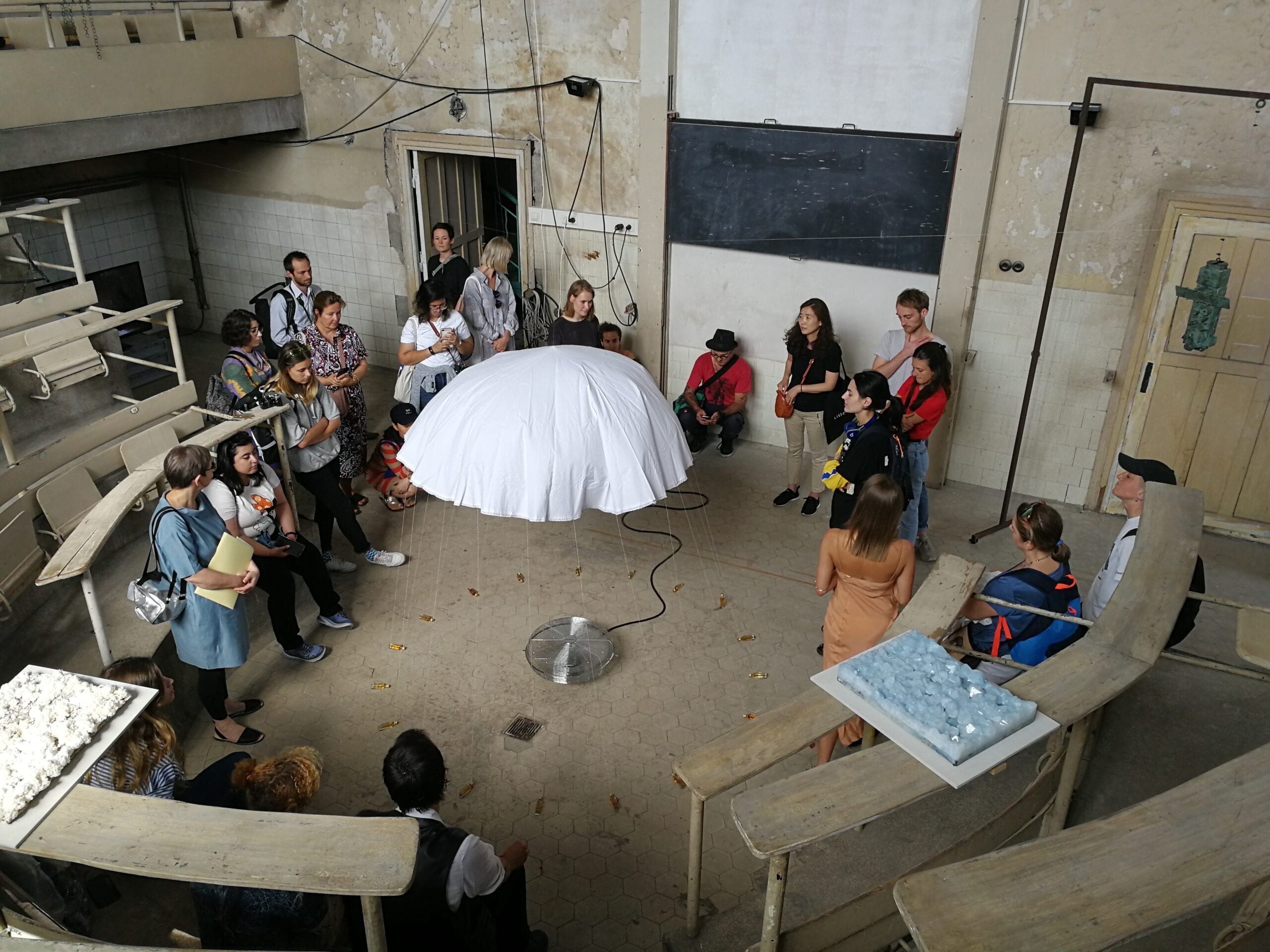 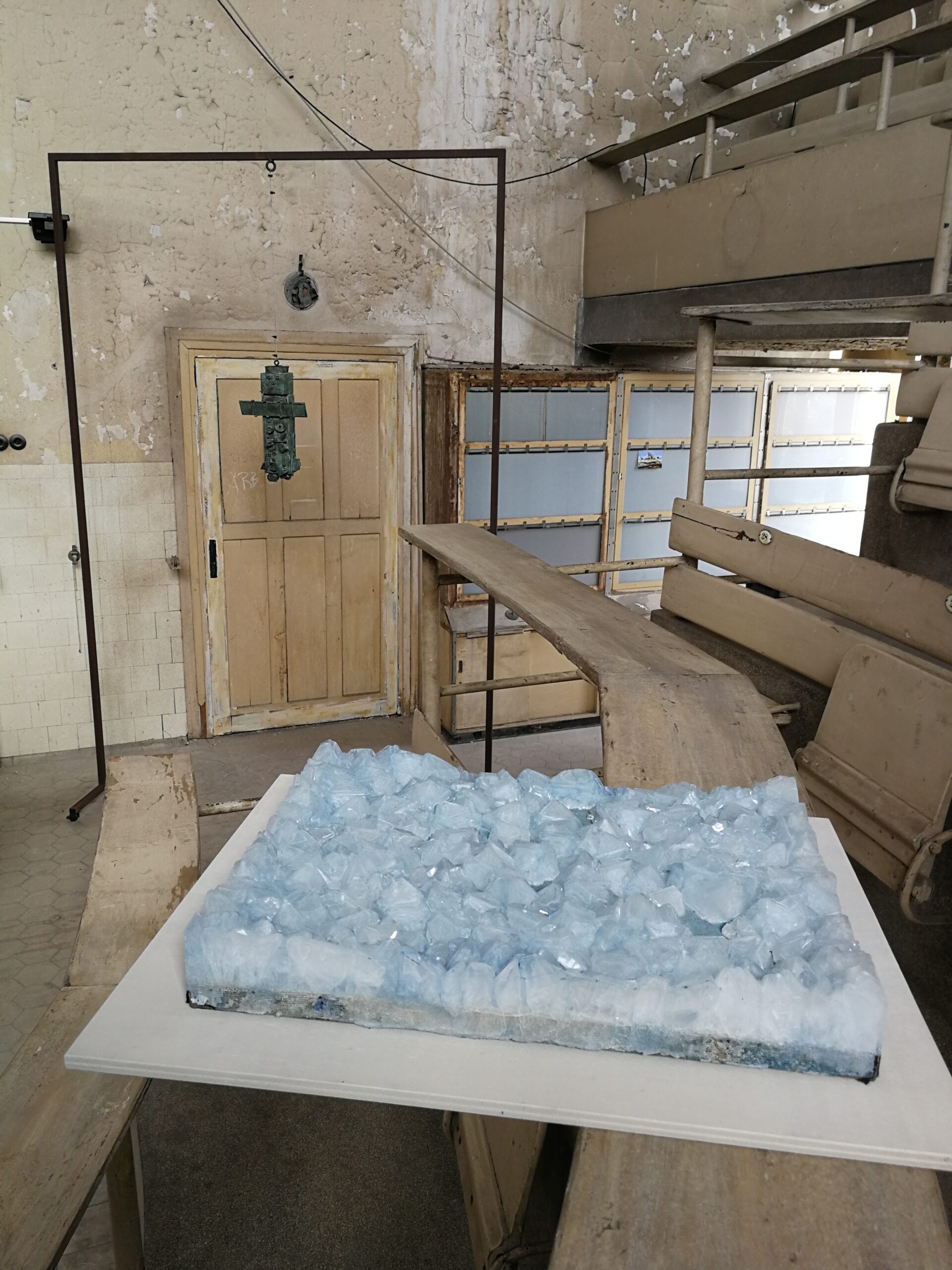 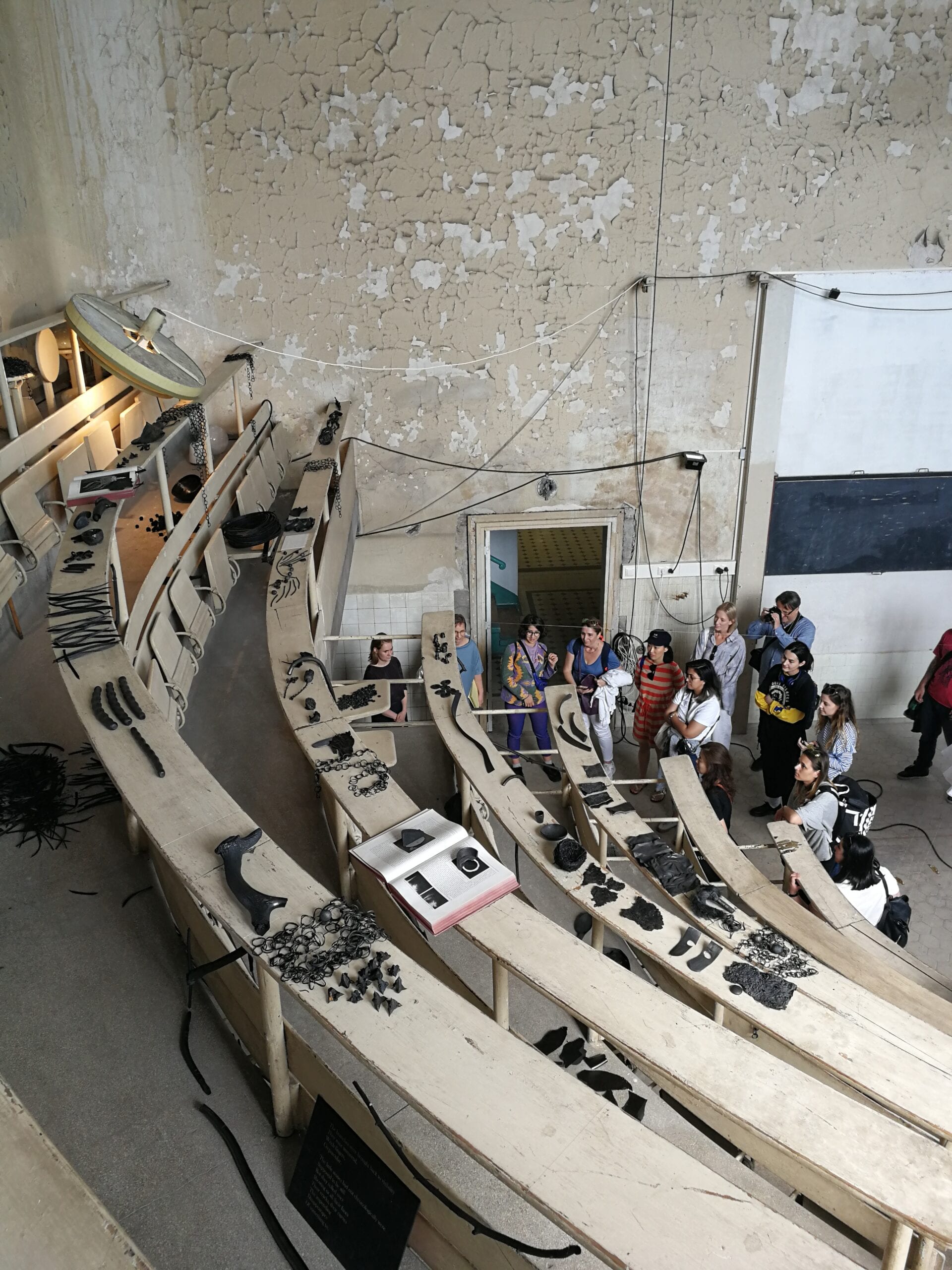 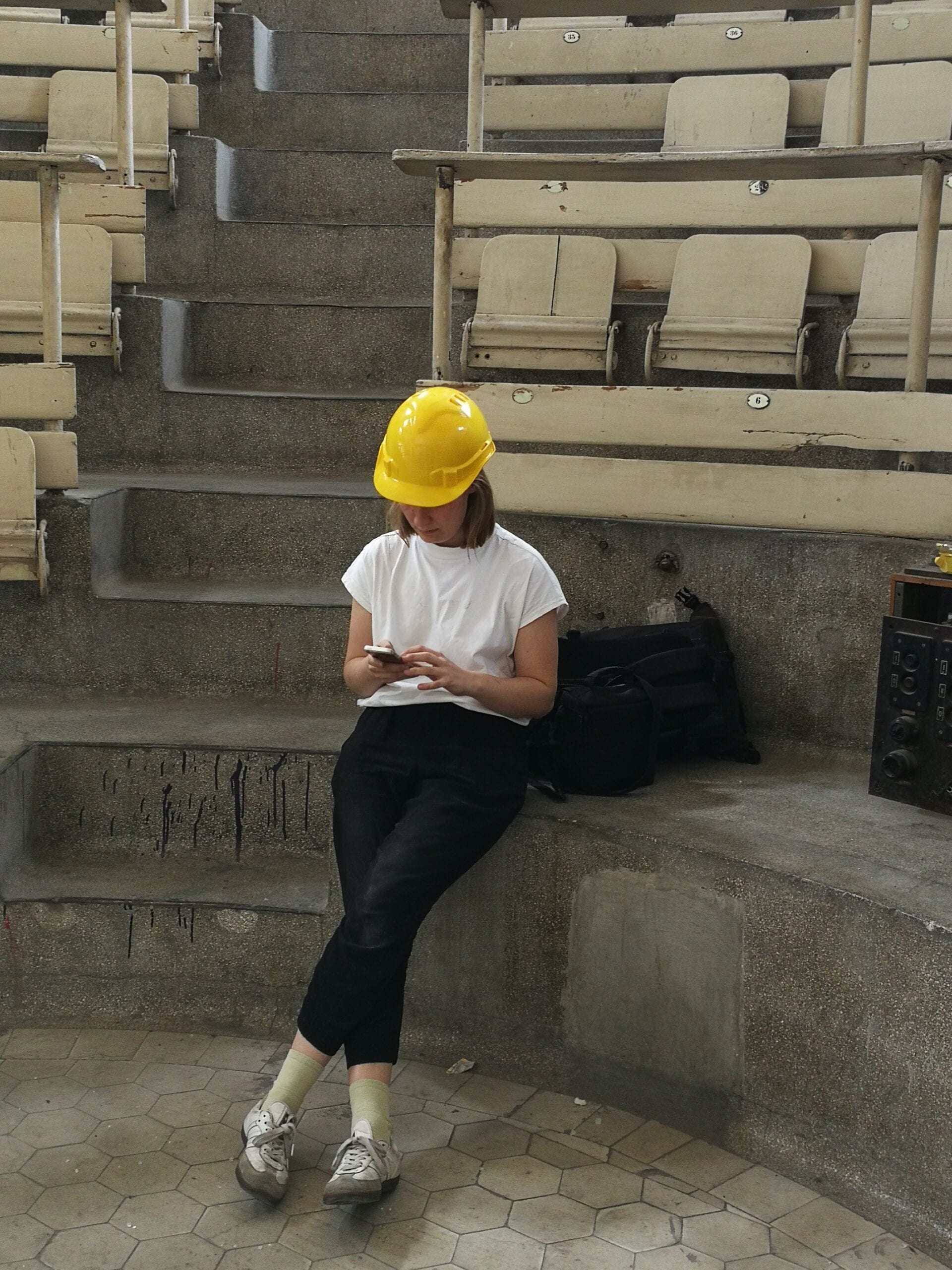