Located right at the famous Berlin main street Unter den Linden and surrounded by a variety of buildings steeped in history, like the State Opera, the state library and the Berlin palace, the Palais of Prince Heinrich first was used as a city palace by the prussian Hohenzollern, after its completion in 1753. In close cooperation with prussian king Friedrich II., architect Johann Boumann created this late baroque building with its former U-shape. King Friedrich Wilhelm III. then dedicated the Palais to the Berlin University, which was founded in 1809. During the 19th century, the interior was adjusted to university standards at that time, while expanding into the north whereby the ground plan evolved to the H-shape, still existing today. In the course of the second World War and the bombing of Berlin, the Friedrich-Wilhelm University got heavily damaged. In the years 1947 to 1962, the now Humboldt-University was rebuilt by the East German government. While reconstructing the building facade true to detail, the inner space was kept simple to match the needs of a modern university.

In that process also the Lichthof Ost was created, which is often in use for exhibitions by Kleine Humboldt Galerie. Passing the main entrance from Unter den Linden, visitors cross the impressive main hall to enter the east wing. Arriving there the Lichthof Ost is located in the southern section. Through big glass doors the visitors enter the exhibition space. An arched glass ceiling provides the room with large amounts of daylight. Additionally to that there is a whole set of ceiling lamps which enable to watch the artworks in their full potential. White walls coexist with the light checkerboard floor, so that visitors may fully focus on the exhibition. Because of its dimensions and especially its history, it still is always a challenge to realize contemporary art exhibitions in Lichthof Ost. 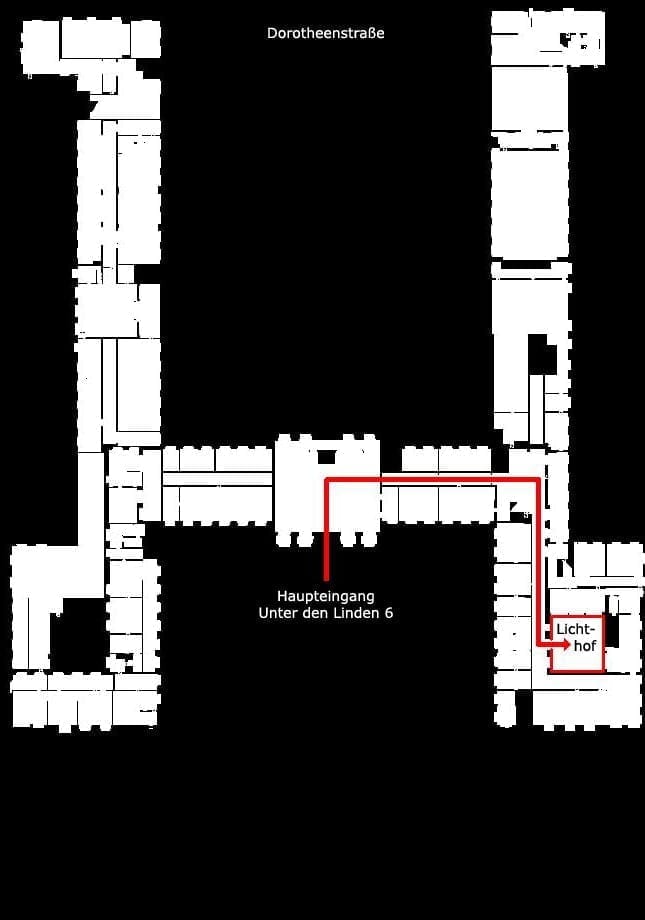 Where to find us:

Eastern Atrium / Lichthof Ost in the main building of